Warhammer 40,000: Darktide is a new co-op shooter from Fatshark, the makers of the Vermintide series. Darktide is in many ways a follow-up to Vermintide, and yet in other ways it is not. They didn’t set out to make exactly the same game — you’ll be thrown a few new curveballs. Here’s what to expect the first time you boot it up.

Darktide takes place in the vast but crumbling city of Tertium, now under attack from vicious forces. The city’s only line of defense is in the Rejects, an army of convicts sentenced to serve the Inquisition through any means necessary — including sacrifice. You and your friends, playing as Rejects, will be mostly alone against an endless wave. Because your team is doing this alone, they must rely on ranged strategies rather than mindlessly charging forward.

This makes choosing your characters and their abilities more important than it was in Vermintide. You can choose your Reject’s body tape, eye color, facial hair and add any tattoos if you wish. You also get to pick which crime the Empire has convicted you of (whether you’re guilty or innocent of it is up to your own interpretation). 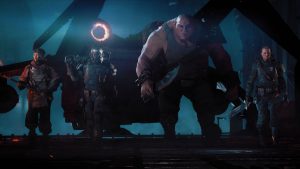 But the most important part of making your character is the class they’ll belong to — one of four. A smart team will balance themselves out with one of each, assuming you have a team of four players to begin with.

Ogryn: These are your tanks. They call ’em Skullbreakers. Best at brute force. They are more effective at close-quarters combat, particularly against Veterans and Zealots, but Ogryn are weakest when fighting Psykers and should keep a safe distance from them. In any situation, they can take a lot of punishment (and dish it out) and provide a useful distraction while the longer-range attackers position their aim.

Veteran: Your soldier class, trained to shoot. They’re members of the Astra Militarum, defenders of the Imperium. It should go without saying that they’re the opposite of Ogryns, best used for long range attacks (but I said it anyway). It’s smart for the Veteran to keep out of sight if possible, sniping the enemy from a place they can’t find. They have the ability to slow down movement to precisely aim at a target, albeit at a cost of their own vulnerability.

Zealot: Also known as Preacher, the Zealot is the closest to a jack-of-all-trades you can get in Darktide. They are ideal for both long-range and short-range combat, though they’re slightly better at close-range. For weaponry they get both an axe and a pistol to start out with. A Zealot can use the ability to lock onto a singular target and prevent them from escaping, ensuring their doom. They also do greater damage to enemies the lower their health is, but that’s a gamble you shouldn’t take lightly.

Psyker: Finally we have Psykers, or Psykinetics. They’re the closest thing to a magic-user you can have in your party. And like most magic-users in worlds like this, they’re terrible at physical, short-range combat. Leave that to the Ogryn and Zealot and keep your distance, and you’ll be able to do some crazy things your enemies will have little defense against. Like blowing up their heads!

Your team will find a greater chance of success if they can master the crafting system to create better weapons and armor than what the game provides by default. Fatshark says they’re aware of how “repetitive” crafting can be in games sometimes, even their own, and has employed the system differently than they did in Vermintide. For one thing, crafting elements are now mainly gathered through missions, as well as offered as rewards for completing objectives. “We believe that this feels on theme to have players collecting these resources in the world, so keep your eyes peeled,” Fatshark says. 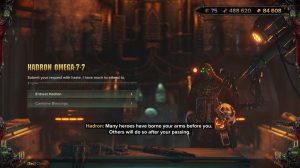 You’ll be doing your crafting at the Shrine of the Omnissiah, located back on your ship. Here a bot called Hadron Omega-7-7 will refine your gear for you if you bring her the materials she requires. There are five religiously-themed options to pick from at this point:

Earn Blessing: This is what the game calls taking an unwanted or discarded piece of gear and disassembling it for parts. You can extract the Blessings from it and re-use them to make an item you DO use more powerful.

Combine Blessings: There are two ways to obtain the more powerful Blessings: find them on missions or combine weaker Blessings to create them. You do the latter here.

Re-Bless: Change the orientation of a weapon by replacing its Blessing with the one you want instead. Note that unlike disassembly, you can’t get the original Blessing back.

Refine Item: This is the option you choose to level up your gear individually. If you do one thing at the Shrine, make it this — it’s kind of crucial that your weapons and curios measure up to the enemies you’ll be facing. Keep in mind that the higher you raise an item’s level, the more expensive it will be.

Consecration: Similar to refining, and cheaper too, but has random effects. If you feel like rolling the dice and living dangerously… 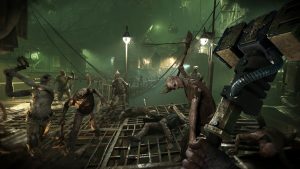 That’s what you need to know to dive into Warhammer 40,000: Darktide — except where to find it. For the time being, the game is a PC exclusive. An XBox version will be released at an unspecified time, which Fatshark has yet to announce. Happy shooting!

Warhammer 40,000: Darktide Official Launch Trailer
Be the first to comment!
Leave a reply »