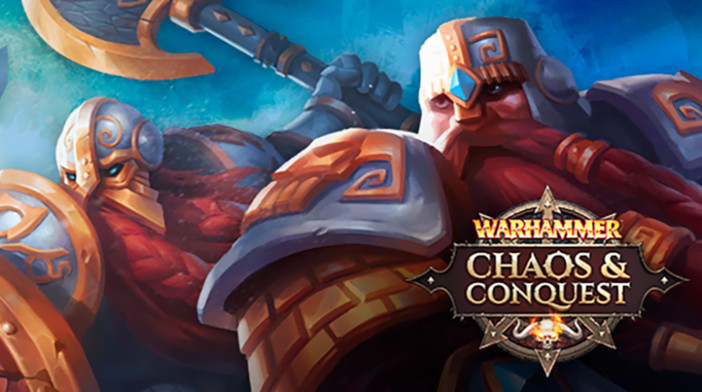 Has Warhammer Chaos and Conquest launched yet? What’s it about again?

Tilting Point, in partnership with Games Workshopand Hunted Cow has launched its epic massively-multiplayer real-time strategy game, Warhammer: Chaos & Conquest. Set in the beloved world of Warhammer Fantasy Battles, the game allows players to construct an imposing stronghold, lead a powerful horde and dominate foes as they spread Chaos across the Old World. Those who wish to embark on a journey to become the ultimate Chaos Lord can do so now by downloading Warhammer: Chaos & Conquest for free onAndroid and iOS devices.

To conquer the Empire of Man, Warhammer: Chaos & Conquest players must command a terrifying warband that they can bolster by collecting mighty Daemons and Warriors of Chaos. The best commanders will be able to smash the defenses of their foes using cunning strategy to overwhelm a wide variety of forces. A great Chaos Lord can expand their military and unholy might by researching skills and building structures, including Chaos Temples, Warlord Conclaves, Hell Cannons and much more.

“After an immensely successful relationship working together on Operation: New Earth, it made perfect sense for us to partner with Hunted Cow for our first co-development project, Warhammer: Chaos and Conquest, based on Games Workshop’s beloved legacy franchise,” said Samir El-Agili, president of Tilting Point. “The team’s passion and commitment to creating an authentic Warhammer experience is immensely prevalent throughout Chaos & Conquest, and we’re excited for new and longtime fans to experience the results of our collaboration.”

Warhammer: Chaos & Conquest features fan-favorite Warhammer Fantasy locations for players to pillage, including the Chaos Wastes, Norsca, Troll Country and the Empire of Man. Players will pledge themselves to the Chaos Gods of Warhammer fantasy (Khorne, Nurgle, Tzeentch, and Slaanesh) by building temples and crushing foes with classic Warhammer units: Marauders, Forsaken and Chaos Warriors.

“As longtime fans, our main focus with Warhammer: Chaos & Conquest was to not only create a standalone mobile game, but also one that encapsulates all the familiar and recognizable elements that make Warhammer special,” said John Stewart, COO of Hunted Cow. “We’re thrilled to finally put the game in the hands of players and watch them journey their way through the dark Warhammer Fantasy Old World.”

In addition to iconic lands, characters and lore from Warhammer Fantasy Battles, Warhammer: Chaos & Conquest allows up to 50 players to defend and support each other in PvE battles – or engage in PvP combat – coordinate the conquest of landmarks important to the Empire and share the spoils of war.  Not all encounters will be friendly. Players can choose to lay siege to each other in an effort to undermine others’ plans of conquest to benefit themselves.

“Chaos & Conquest has been crafted with a genuine passion for the Warhammer brand and a deep understanding of what makes games fun and engaging.” said Jon Gillard of Games Workshop. “It’s an absolute pleasure  to be working with Tilting Point and Hunted Cow as they apply their insightful commercial and creative expertise whilst faithfully building on the Warhammer franchise’s legacy.”

A true conqueror is never done, and players in Warhammer: Chaos & Conquestwill continue to host ongoing special events and daily quests, such as conquering the roaming warbands of other Warhammer Fantasy factions, including Greenskins, Beastmen and Dwarfs.