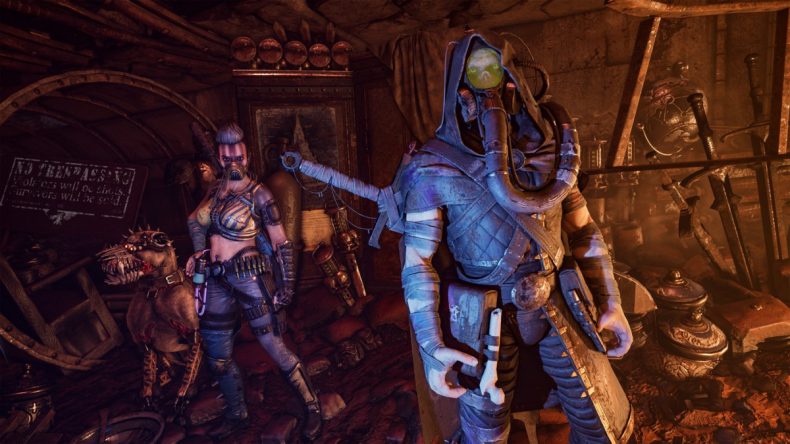 The Warhammer worlds have been adapted into many video game genres, but how would it handle as a first-person shooter? Would you be interested in such a thing?

Whether there’s interest or not, looks like it’s happening. A listing was discovered on Microsoft’s online storefront this morning. It’s not an official announcement, but it might as well be…the page contains everything you need to know.

The new game will be based in the Necromunda universe, a Warhammer off-branch first introduced in 1995 as the premise of a miniatures tabletop game. The setting is the 41st century in a giant industrial city, and the focus characters are usually rival gangs looking to pick each other off…a fitting premise for an FPS. And so it shall be.

You’re a bounty hunter in the city of Necromunda. You play this one solo, but you’ll have AI assistance in the form of a “cyber-mastiff” (a cyborg dog). Your special abilities will include a grappling hook you can use to ascend to high places quickly. Images suggest you may have allies in the form of Eschers (an all-female gang with chemically enhanced skills).

Necromunda: Hired Gun is an indie fast-paced, violent, and thrilling FPS set in the darkest reaches of Warhammer 40,000’s most infamous hive city. For the right price, eliminate the most notorious gangers and mutants. Your armory is a sprawling arsenal. Your body is enhanced with a dozen customizable augments to run on walls and leap over chasms. Your cyber-mastiff will sniff out and kill enemies for you, while your grappling hook allows quick, agile traversal of the massive environments.

This isn’t the first use of Necromunda in a video game…tactical strategy titles for consoles, PC and mobile exist. It will be, however, the first FPS to use the premise.

Necromunda: Hired Gun is now in development at Streum On Studio, who previously created Space Hulk: Deathwing for PS4 and PC. The game is expected out this June.