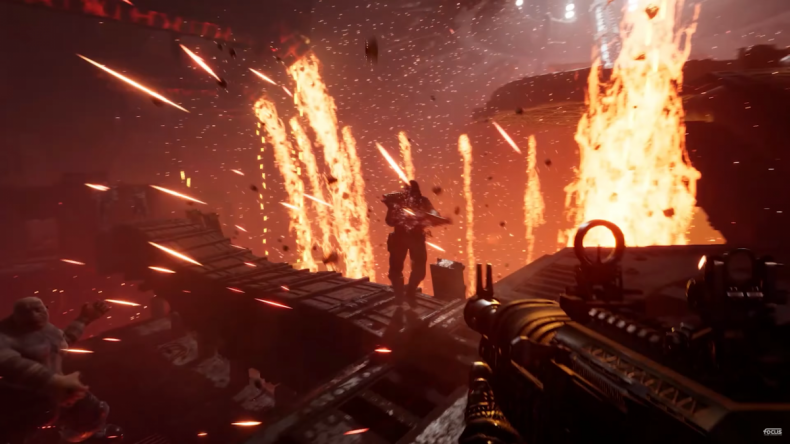 Now that we know Necromunda: Hired Gun is coming, how soon can we expect a trailer? Nearly instantaneously….how’s that for fast service?

Earlier this week a listing was discovered on Microsoft’s online storefront for a first-person shooter set in the Warhammer 40K universe. The listing was accurate, confirmed today by developer Streum On Studio and publisher Focus Home Interactive.

The Necromunda universe is a Warhammer off-branch set in the 41st century, specifically within a futuristic city full of grime, crime, corruption and class division. The focus characters are usually rival gangs looking to pick each other off, which works well for FPS gameplay. Necromunda first appeared in 1995 as the premise of a miniatures tabletop game, and it’s been used as a premise for console, PC and mobile titles in the past. This is the first FPS set in that world.

In Necromunda: Hired Gun, you’re a bounty hunter who works solo, with the exception of your faithful canine cyborg sidekick, the “cyber-mastiff.” Your special abilities will include a grappling hook you can use to ascend to high places quickly. The latest trailer confirms not only the Eschers form the concept shots (an all-female gang that specializes in chemical enhancments), but Goliath warriors (who create armor out of scrap and rush at you with blazing rivet guns), and Ogryns (mutants who are exceptionally strong and throw junk at you). A lot to deal with.

Necromunda: Hired Gun is an indie fast-paced, violent, and thrilling FPS set in the darkest reaches of Warhammer 40,000’s most infamous hive city. For the right price, eliminate the most notorious gangers and mutants. Your armory is a sprawling arsenal. Your body is enhanced with a dozen customizable augments to run on walls and leap over chasms. Your cyber-mastiff will sniff out and kill enemies for you, while your grappling hook allows quick, agile traversal of the massive environments.

Necromunda: Hired Gun is due out June 1 for Playstation 5, Playstation 4, XBox Series X, XBox One, PC and Stadia. Here’s the trailer we mentioned…